Presented in memory of former Commodore John Hodgson by his widow, Ennys.   John gave to his boats the same care and attention as he gave to other people, so that it was natural that a trophy in his name should be awarded to the most cared-for boat of the season.  Accordingly, from 2003 to 2010 the cup was awarded to the winner of an annual Concours D’Elegance competition which was judged by Ennys and the Commodore.

Trying to pick the winner on the ‘concours’ basis was always difficult and in 2011, Ennys decided that she would prefer to award the prize on the basis of best fancy dress at the Laying-Up Race.

Her opinion was that John “would have appreciated the fun of racing when dressed-up”. 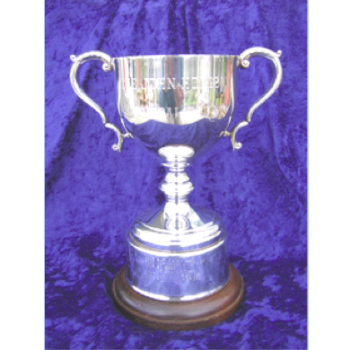 John Hodgson was an excellent Commodore and did a very great deal for the club.  He was very much a ‘people person’ and spent much of his time laying the foundations of the sociable club that now exists.

See the laying up race tankard, now on page 20, awarded  for most accurate finish time.