Presented by Ron and Jenny Dean of Mylor Chandlery, originally as a prize for the Cork Race. The first race was to Cork, then in alternate years it was awarded for races to Cork and the Channel Islands.

In 1994 these races were no longer run and races to Plymouth took their place, for which the cup was used.

The cup has Plymouth engraved on it at the top in a different script, but this was not because it was the first race, it was just that there was room to engrave it there.

In 2019 W and E classes were combined and this trophy was “retired”. 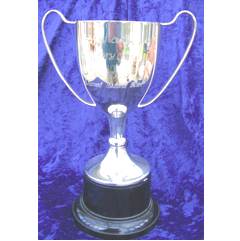 1989 was for the Plymouth Race

1991 thought to be for Channel Islands

Any corrections or further information welcome